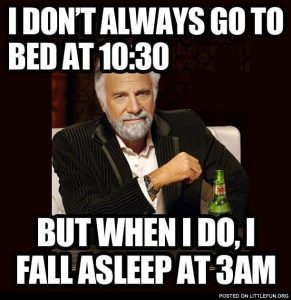 Have your grandparents always nagged to you about going to bed late? Did they reiterate: An hour before midnight is worth two after? Well, maybe you’ll be pleased to know that they’re not quite right. Dr. Matt Walker, who teaches at the University of California, says that there is no magic sleep that goes away at the stroke of midnight, but the time of night does affect the quality of your sleep. Hm… Yeah, there’s no straightforward answer, but there is some insightful information to help you understand our sleeping lives better.

Walker says that as the moon runs its course across the sky, the structure and quality of our sleep changes. Our sleep has a circadian rhythm in 90-minute cycles. During sleep, our brain moves from deep, restorative, non-rapid eye movement (REM) sleep to dreamy REM sleep. The cycle is quite stable, but as the night wears on the ratio of non-REM to REM sleep changes.

According to Walker, deep non-REM sleep dominates the early night. As sunrise gets closer, REM takes over. Is that what the adage had in mind? Maybe, though both types of sleep have their respective benefits for the body.

How does this connect to the best bedtime? The transition from non-REM to REM sleep occurs at certain times of night and the time when you went to bed doesn’t matter. If you turn in late, like 4 a.m., you’ll get REM sleep, which is lighter and dream-laden. But, when you get up, you won’t be up to your best.

That is bad news for those who regularly work night shift. Dr. Walker says efficient sleep just isn’t possible at unconventional times of night and day.  It’s unfortunate that our circadian rhythms of sleep and wake, which have been tuned for hundreds of thousands of years, don’t leave a lot of room for change. If you go to bed late because you’re a bartender, a nightshift worker or a student who likes studying at night, the fact you’re doing that for a few years or even decades is nowhere near enough to shift the cycles which have been inscribed in our bodies.

Between 8 p.m. and 12 a.m. approximately, you can get all the non-REM and REM sleep you need, if you like to sleep little. Maybe that’s the reason why we sometimes wake up in middle of the night completely refreshed if we go to bed very early.

And, your genes dictate whether you’re a night owl, an early bird or something in between. So, depending on your genes, you have a preference for an earlier or a later point in that 4-hour window before midnight.

Dr. Allison Siebern of Stanford University confirms that going to bed early defies the physiology of night owls. The same goes for early birds who try to hit the sack late. For both of these sleeper types, and all those who are somewhere in between, the best advice is to listen to their body and go to bed when they feel most sleepy.

Dr. Siebner explains that there’s no point in forcing yourself to go to bed when you don’t feel like it. The catch is that your family and work may have the deciding influence on when you go to bed. The best would be to try to match your biology to your schedule and get 8 hours of shuteye.

Both Siebner and Walker say that our sleep schedule transforms as we get older. Small children are usually morning larks, whereas college students feel sleepiest around midnight. After college, at the beginning of working life, you tend to turn in earlier in the evening, and this trend is likely to progress with age.

Siebern’s advice is to experiment and focus on the signals your body sends you. Feeling sleepy is your best indicator to go get your Z’s. And you should try to get up at roughly the same time every day. It’s ok to sleep an extra hour when you’re not working, but don’t make huge swings, so that you don’t make it harder for yourself to find the best bedtime for you.